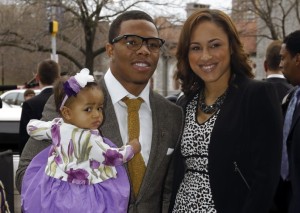 According to CNBC, The Baltimore Ravens recently cut ties with football player Ray Rice. Rice was recently caught in a domestic violence assault towards his fiancé. The video was shot in February and recently surfaced that running back for the Baltimore Ravens, punched Janay Palmer, now wife, in the face in an elevator of the Revel casino in New Jersey. After Palmer appeared to be knocked out from consciousness from the blow, Rice was revealed on the video dragging her limp body out of the elevator.

Months later, he was indicted by an Atlantic County jury on one count of aggravated assault; pleading not guilty. After such time he agreed to enter a pre-trial intervention program upon the completion of which the criminal charges would be dropped. Rice at the time of the conviction initially received a two-game suspension by the NFL league that was just modified to an indefinite ban since the release of the graphic video tape. Baltimore Ravens completely severed ties with former running back.

Domestic violence is a serious offense and one facing such criminal charges should seek representation from an experienced Criminal Defense attorney as such consequences may be severe.

In this circumstance the spot light that the former running back received propelled the football team to remove such offenses and negative attention from the team – as domestic violence against women is a serious matter.

If you know anyone that is being assaulted or abused it is important to report such matters to the proper authority and help to stop domestic violence.

A Criminal Defense Attorney can provide you with legal counsel, and advise you in regards to your rights. An experienced lawyer can also advise you in the actions and procedures that need to take place going forward. If you have been arrested for any criminal actions, call Blick Law Firm today for a free 15-minute consultation. Think Quick, Call Blick!

0saves
Save
If you enjoyed this post, please consider leaving a comment or subscribing to the RSS feed to have future articles delivered to your feed reader.
This entry was posted in Blog, Criminal Law. Bookmark the permalink.
Call Today For a Free Consultation! 888.973.2776
Blick Law Firm is grounded in Christian values, & strives to meet the legal needs of its clients & their families, while providing physical & emotional support.
Submit the following information and we will have one of our representatives contact you.