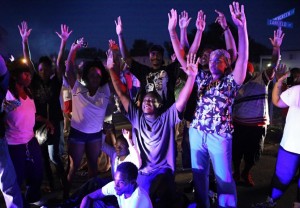 According to New York Times, a man had been shot and killed after he had assaulted a police officer and the two had struggled over the officer’s gun inside his patrol car.

18-year-old, Mike Brown was the unarmed black teenager killed in a fatal shooting on Saturday by a police officer in a St. Louis suburb. However, the death of the youth, caused heavy protests on Saturday and Sunday in Ferguson, Mo. Hundreds of people gathered at the scene of the shooting to question the police and to light candles for Mr. Brown.

Currently, elected officials and advocacy groups held a full investigation and questioned the tactics of the police, who acknowledged that Mr. Brown had been unarmed.

Acts of police assault warrant arrest and criminal charges; unlike this unfortunate incident that occurred over this past weekend.

Law enforcement must have probable cause or a warrant to make an arrest. If a law enforcement officer has a reasonable belief, that there is in fact a high probability that you have been involved in criminal activity, the police officer may arrest you. If you are arrested, this means that you are officially being charged with a crime. As opposed to a detainment, you do not have the right to leave once an arrest has taken place. Once the arrest has been made, you can be held in jail for up to 24 hours, and you may have to pay bail to be released from custody.

It is important to quickly seek legal representation upon an arrest to protect your rights. A Criminal Defense Attorney can provide you with legal counsel, and advise you in regards to your rights. An experienced lawyer can also advise you in the actions and procedures that need to take place going forward. Call Blick Law Firm today for a free 15-minute consultation. Think Quick, Call Blick!

0saves
Save
If you enjoyed this post, please consider leaving a comment or subscribing to the RSS feed to have future articles delivered to your feed reader.
This entry was posted in Blick Buzz, Blog, Criminal Law. Bookmark the permalink.
Call Today For a Free Consultation! 888.973.2776
Blick Law Firm is grounded in Christian values, & strives to meet the legal needs of its clients & their families, while providing physical & emotional support.
Submit the following information and we will have one of our representatives contact you.