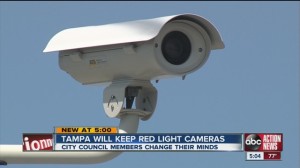 Its 5 p.m. and everyone is rushing to get home. Traffic is chaotic and you are at one of the busiest intersections in the Tampa Bay area. To make things worse, you are straggling behind a bus and side-by-side traffic prevents you from moving over to another lane. The bus stops to let out some passengers; again, you are forced to wait for the hordes of people exiting the public commuter. This time, however, you realize that you are in the middle of the road and have unintentionally gridlocked the intersection. You sit uneasy, waiting for the bus to start moving again and free you from your awkward disposition. Like showers that have been cued to rain, when someone says “things could be worse”, the intersection lights begin to phase between colors. First the green light changes to yellow and all too sudden yellow becomes red. From the background a bright light illuminates the scene like lightening striking. Say hello, because you are on candid camera.

The red light camera has been one of the most controversial pieces of equipment used by traffic enforcers. Despite a multitude of complaints and issues, advocators cite the incidence of reduced fatalities at major intersections where cameras have been incorporated and frequently appeal to people’s emotions. As a result, many people have been issued an unfair traffic ticket citations for being in an unfortunate circumstance.

Traffic citations can be extremely stressful. For people who are living paycheck to paycheck the fee for a ticket can be a huge setback forcing them to decide between paying the bills or the ticket. In addition to the initial ticket cost, people are forced to go to traffic school to avoid receiving penalties on their license which is another incurred cost depleting both time and money. Regardless of doing these things, the insurance company may still choose to raise their premium forcing them to suffer through the residual outcome of their messy situation.

Taking your traffic ticket to court could save you the hassle of going through these steps. Winning your case could mean no ticket payment, no traffic school, and no increased insurance premiums. Best of all, your traffic violations could be expunged from your records and there is no history of offenses.

There is no guarantee that you will win your case. It is important to have a Criminal Defense lawyer who is aware of the minutiae of traffic law to guide you and give you the best advantage. Some cases allow you to plea for a settlement that reduces the costs and penalties associated with traffic tickets. These matters are best discussed with a traffic court attorney. To schedule a consultation with an attorney, in good-standing with the bar, Think quick, Call Blick!

0saves
Save
If you enjoyed this post, please consider leaving a comment or subscribing to the RSS feed to have future articles delivered to your feed reader.
This entry was posted in Blick Buzz, Blog, Criminal Law, Personal Injury. Bookmark the permalink.
Call Today For a Free Consultation! 888.973.2776
Blick Law Firm is grounded in Christian values, & strives to meet the legal needs of its clients & their families, while providing physical & emotional support.
Submit the following information and we will have one of our representatives contact you.