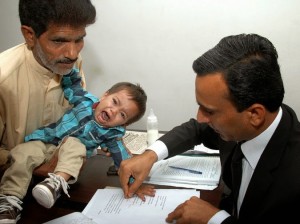 In recent news, a nine month old baby was arrested for attempted murder in Pakistan. Due to a confrontation with the police over an unpaid bill, an entire Pakistani family was accused of attempted murder during a protest against gas cuts and price increases, along with their nine month old child. The child cried as his grandfather held him while the police took his fingerprints. The charges against the nine month old were eventually dropped however, it is deeply troubling that Pakistan’s criminal justice system would even allow something like this to happen.

Unfortunately, terrible situations such as this one occur every day in different parts of the world. As American’s, we are extremely fortunate to have a justice system designed to protect us from such unthinkable situations.

As a democratic nation, our constitution safeguards us from government abuse and Constitution safeguards us from government abuse and oppression. The American criminal justice system upholds the legal rights of American citizens that are accused and convicted of committing a crime. The civil rights and liberties expressed within the American constitution are heavily enforced in the United States; they must be upheld in order to protect the natural birthright of freedom and liberty that belongs to all people.

Blick Law Firm strives to protect the rights of all its clients by providing exceptional legal representation in criminal law. The experienced attorneys at Blick Law Firm are dedicated to “helping the hurting”, and diligently work hard to provide excellent legal counsel. Founded on Christian values, Blick law firm strives not only to meet the legal needs of clients, but also aims to instill hope for the future through the gospel of Jesus Christ.

0saves
Save
If you enjoyed this post, please consider leaving a comment or subscribing to the RSS feed to have future articles delivered to your feed reader.
This entry was posted in Blog, Criminal Law and tagged arrest, criminal defense attorney, criminal law, justice system. Bookmark the permalink.
Call Today For a Free Consultation! 888.973.2776
Blick Law Firm is grounded in Christian values, & strives to meet the legal needs of its clients & their families, while providing physical & emotional support.
Submit the following information and we will have one of our representatives contact you.